It was an interesting night at Molly's starting with some behind-the-scenes mishaps and some crazy weather. We lost our power cord for the sound system. It just vanished. Luckily, it was easily replaced in time to start the game. We had a downpour moments before the game began with harsh lightning all evening. That's not something you like to see when you're holding a wired microphone for two hours.

The game itself was fairly straightforward, but we did have a team stand out from the rest. We Don't Know dominated the first four rounds with a perfect game. They missed two questions in the fifth, and barely held onto the lead at the end of the game (and if you ask the second place team, who lost by only three points, it all came down to bad wording on a Round 6 question).

Folks seemed to enjoy the Possessive Movie Title round, despite the trick question of Monster's Ball vs. Monsters, Inc. or University. The Pee Wee's Big Adventure audio clue brought audience participation, applause, and laughter. That's what we aim for!

I forgot to get a photo of the winning team tonight with my own camera, but I did take a picture with one of theirs, so maybe they'll post it. I did grab a shot of that Granita I was enjoying. Mixed berry and rum? Thank you, I'll have another! 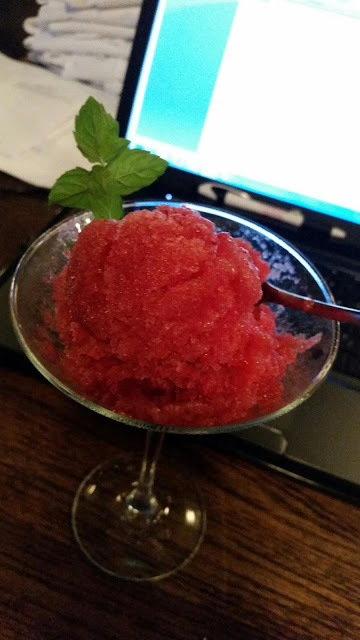 Posted by Louisville Trivia at 11:21 PM