"Colonel" Harland Sanders wasn’t born or raised in Kentucky, but he did become a Kentucky Colonel, hence his frequently-used title. It wasn’t until 1952, when he was 62 and completely broke, that his friend Pete Harman helped him create the first KFC (Harman also came up with the slogan "Finger Lickin' Good"). The original Sanders Court & Cafe was located in Corbin, Kentucky and had been doing steady business, but was nothing to write home about. The first restaurant to sport the Kentucky Fried Chicken name was actually located near Salt Lake City, Utah. A few years later Dave Thomas, of Wendy’s fame, a young Vietnam vet at the time, ended up working for Sanders and made several innovative changes. Remember the giant rotating bucket outside your local KFC? That was Dave's idea. 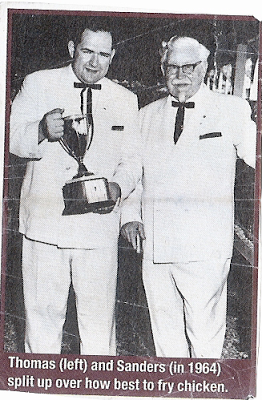