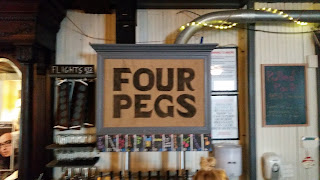 It was another hot summer night at Four Pegs with a great, energetic crowd. Brandon was off celebrating his birthday, so we called in a sub. The game started a bit slow when the highest score in Round 1 was just 7 points. Folks did fairly well on the Geography round. Sadly, New Hampshire touches neither New York nor New Jersey. Teams who missed that one should definitely visit the northeast. Beautiful country up there.


We got a few teams with 9 points in the Picture Round, but no one knew Flea's real name. Speaking of names, the Guys Named Jeff Round was hit or miss. At least everyone knew Jeff Goldblum.

Sports? My favorite response was "This ain't that kinda bar!" Speaks for itself. It was Round 5 and that was also the average score for that round. We moved quickly and carefully to our Final Round. most of you guys knew both of the three finger salutes we asked you about (and thanks for your PG answers). There was another sports question that threw most people off. Plant names were a bit difficult. But you guys redeemed yourselves with the final question, another shot at geography.

At the end of the game, even though We Know Jack! and Forever Alone and Friends put up some good fights throughout the night, Polar Bear With Me walked away the winners. (Sadly, I forgot to snap a winning photo, so that Jeff Goldblum pic will just have to do!)
Posted by Louisville Trivia at 8:22 AM